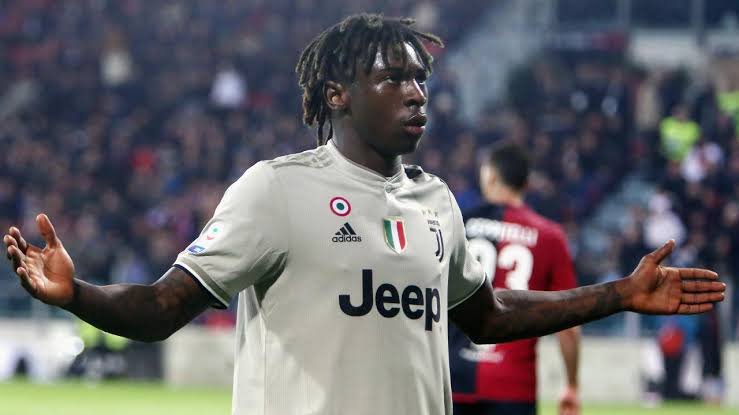 Although he just turned 19, the Italian-born Ivorian has been on everyone’s lips, and not just for his game-changing style of play.

On Tuesday, a week after England’s star players were racially abused during an international match in Montenegro, Moise Kean, a rising star in Italian football was subject to racist abuse during a Serie A match between Juventus and Cagliari.

The teenager had to endure monkey chants and a rude Italian gesture known as a ‘buu’ (which sounds exactly like it looks) from a section of Cagliari fans during a game Juventus won away 2-0.

After scoring his team’s second goal late in the match, the 19-year-old held his arms aloft in front of the home fans, which intensified the abuse.

“The best way to respond to racism,” he wrote on Instagram afterwards aside a picture of himself with arms outstretched.

Instead of receiving support from his teammates, however, Kean was reprimanded, and even told the incident was partly his fault.

Leonardo Bonucci was one of the players that came over to Kean, pulling him away as he stood and celebrated in front of the Cagliari fans with his arms outstretched. 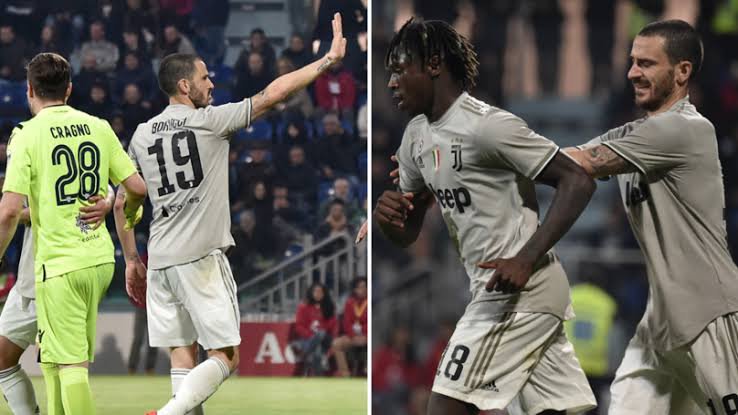 Speaking to Sky Sport Italia after the match, Bonucci said:

“There were racist jeers after the goal, Blaise (Matuidi) heard it and was angered. I think the blame is 50-50, because Moise shouldn’t have done that and the Curva should not have reacted that way.”We are professionals, we have to set the example and not provoke anyone.”

Of course since he made those controversial remarks, many have supported the fact that Kean stood up to racist supporters, including fellow ‘black’ footballers Raheem Sterling and Mario Balotelli who have also been victims of racist abuse.

And many more have slammed Bonucci’s post-match comments.

England and Manchester City star Raheem Sterling led the criticism of the defender’s remarks, posting on Instagram: “All you can do now is laugh,” while English rapper Stormzy has also gone against Bonucci on the same social media platform.

Much traveled striker Mario Balotelli, while speaking to ESPN in February said that racism in Italy was much worse than in any other country he had played in, commented on Kean’s Instagram post:

“Bravo. Bonucci is lucky that I wasn’t there. Instead of defending you he does this? I am shocked,” he wrote.

Bonucci, 31, has since posted an Instagram story which said: “Regardless of everything, in any case … No to racism.”

But that did little to calm the storm caused by his initial reaction.

Netherlands and Lyon Memphis Depay directly addressed Bonucci on Twitter, posting: “I am disappointed in your reaction … We will not be quiet!”

Manchester United midfielder Paul Pogba reposted Kean’s picture, with the caption: “I support every fight against racism, we’re all equal.”

Among those also supporting Kean was former Juventus and Manchester United defender Patrice Evra tweeted: “This is not acceptable in football or anywhere in the world. Well done to @MoiseKean for standing up to them and showing them who is boss.”

During a UEFA’s Equal Game conference on Wednesday, Toure who has been advocating for severe punishment for culprits found guilty of racism called out the Juventus manager, Massimiliano Allegri and the experienced centre-back for their initial responses and he awaits the decision of the Italian FA regarding the issue.

“For me, it’s a disgrace. You can’t do that,” Toure was quoted as saying by ESPN.

“It was unbelievable. A teammate, a manager saying: ‘You shouldn’t have done that’ to one of your own players.

“I want to know if the Italian FA is here today?

“I have been in football for many years now and to be honest I haven’t seen progress. It’s always the same things. We are in 2019 now and look at what happened yesterday?”

Meanwhile, Nigeria international and Brighton defender Leon Balogun has expressed his support for Kean but is still stunned by Bonucci’s comments.

“We’re standing united behind you brother, Moise Kean,” Balogun tweeted. “Wondering how Leonardo Bonucci would react if you do the same thing in front of him after scoring your next goal.”

24 hours after his outburst, the Italian defender has now issued a statement seeking to clarify his interview about the racial abuse the 19-year-old received:

“After 24 hours I want to clarify my feelings,” he said on his official Instagram.

“Yesterday I was interviewed right at the end of the game, and my words have been clearly misunderstood, probably because I was too hasty in the way I expressed my thoughts.”

Hours and years wouldn’t be enough to talk about this topic. I firmly condemn all forms of racism and discrimination.

“The abuses are not acceptable at all and this must not be misunderstood.”

In the aftermath of the game, Juventus manager Massimiliano Allegri said that there should be a lifetime ban handed down to the fans chanting racist abuse:

“He scored another goal and did better in the second half, whereas he got more or less everything wrong in the first half,” he told Sky Sport Italia.

“I didn’t hear anything from the stands, as I was focused on the game. You need great intelligence to deal with these situations and should not go to provoke people. That, of course, does not mean the idiots in the crowd and the way they reacted should be justified.

“As always in life, there are idiots who do stupid things and ruin it for everyone else. I don’t think talking about it all the time helps. I don’t think halting play helps, because not everyone in the stadium did that.”